Exclusive: The truth behind the Indyrally figures

By Longshanker and Young Erga

So totally and utterly wrong that AhDinnaeKen is embarrassed for them.

You can just about hear AhDinnaeKen shouting out – on my video recording at least – “where?”.

Young Erga gave me one of her friendly warning punches, her ‘withering look’, and a sharp verbal rebuke reminding me where I was.

Naturally, that was enough to shut me up.

But it got me to thinking. It couldn’t really be that hard to work out a rough figure given the starting point of the High Street/Cockburn Street muster location and the overall distance from there to the end of the line at the Castle Esplanade – where the last of the Indyrally marchers could be found assembling.

So, basing the crowd on figures which generously allows for more people than were actually there, let’s try some basic maths based on crowd density and distance.

Check this yourself using Google maps and phone snaps from the day – of which, AhDinnaeKen has a few. 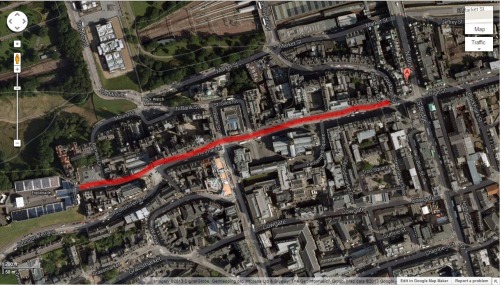 The muster point – marked in red – in its full glorious length. Longshanker and Young Erga walked the whole length and back again to take in the sights.

1) Distance: From the corner of High Street/Cockburn Street to the Castle Esplanade – where the last of the marchers (Aberdeen Yes banner) lined up – is approximately 500 metres at most.

2) Maximum number of people in a line, across the width of the road, backed up by pictures and our own eyes was approx 14 people max.

On the basis of 2) and 3), on every 10 metre length of road you would have approximately 140 people max. To be more than fair, the number could be plus or minus 10 per 10m of road. 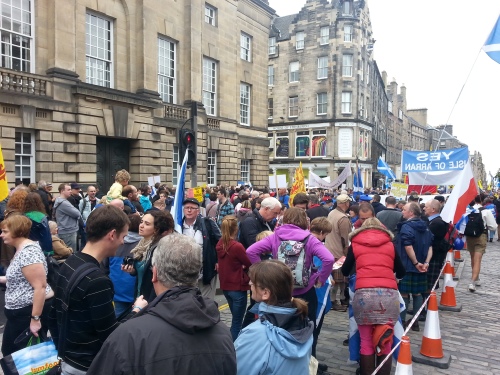 Approx 10 to 15 people formed each line with approx 10 people to each metre going backwards.

Therefore, let’s call it a generous 150 people per 10 metre length of road.

There were a couple of inlets along the High Street allowing for certain other pro-Indy groups to join in, which could account for approximately another 1,000 more marchers – at the most.

Allowing for more people joining from elsewhere, such as from Dr. Who’s Tardis or being parachuted in by space monsters or teleporting from the Starship Enterprise, and you’re looking at 10,000 people absolute max.

Judging by the aerial picture, taken at 2:20pm and Tweeted that day, of Calton Hill, 10,000 is hugely optimistic. 30,000 is absolutely barking mad delusional – not a phrase you would normally associate with Nicola Sturgeon, the SNP or the Yes campaign.

Part of the reason AhDinnaeKen travelled to Edinburgh was to see the numbers of participants at first hand and to let Young Erga engage with something which is, no matter how you look at it, historic.

Walking round the hill on a quick recce after Dennis Canavan had nearly blown a gasket wittering on about “foot soldiers” and armies and training, it was easy to conclude that 10,000 was, at best, optimistic.

This piece isn’t written to sneer. Young Erga and myself, loved the day: Great music, mostly interesting speakers, lots of colourful flags and a fantastic atmosphere all contributed to an unforgettable and appreciated experience.

But to kid yourself on that there were 30,000 people there merely reinforces the external belief that Indy believers, at least the hardcore believers, are gullible and will swallow anything they’re told by the SNP or the Yes campaign.

If you’re going to swallow fabrications like that, then you’ll swallow anything.

And that’s truly a worry.