As the reverberations of the impact of the Inralavyson report echo round the media, political and social networking sphere, AhDinnaeKen would like to take this opportunity to apologise unreservedly to the Firstminster.

THERE COMES a time when an unfunny blog based on fundamental negativity and dishonesty has to apologise to the great and the good – especially when events leave them vindicated.

As has become increasingly clear, and reinforced by the words of the Inralavyson report, AhDinnaeKen has been completely and utterly wrong about the reputation and integrity of Scotland’s Firstminster.

Lord Inralavyson said that there was “no evidence that Firstminster Salmond has ever told the truth” and that “he cannot be criticised for never having told the truth“.

He is a mere politician after all. We accept that he is not divine and that he scratches his backside and picks his nose just like everyone else.

AhDinnaeKen accepts Lord Inralavyson’s finding and would therefore like to take this opportunity to unreservedly apologise to the Firstminster.

We apologise unreservedly for ever having believed a word uttered by Wee Eck since the beginning of his career, ever.

We apologise unreservedly for believing that the formation of the 79 Group was anything to do with political conviction and integrity, and that it was indeed the start of a power grab within the People’s Front of the Scottish National Party.

We apologise unreservedly for believing that the Firstminster had the workers of Johnnie Walker’s plant’s best interests at heart and we apologise for giving him the benefit of the doubt over his castigation of the Diageo board.

We apologise unreservedly for doubting that he indulged in barefaced lies to parliament and we apologise for ever believing that he provided “as exact an answer as anyone has ever given to Parliament“.

We apologise unreservedly for accepting that the tippexing of the official parliamentary record was an honest mistake and we apologise for ever having given the Firstminster the benefit of the doubt over anything.

AhDinnaeKen is pleased to set the record straight and we wish the Firstminster well with his unwavering adherence to all things dishonest and underhanded.

Official: SNP couldnae organise a piss up in a brewery

Eurocrats suggest that SNP prohibitionists take their pished attempt at booze legislation back to the cludgy where it came fae.

“The greatest humiliation in life, is to work hard on something from which you expect great appreciation, and then fail to get it.” – E. W. Howe. So much for the competence of oor wid be leaders. Haw haw!

Doon the drain like yer Bucky when the polis catch ye drinkin’in the park.

Whit diz that tell ye aboot the SNP man? Answers on the back o’ a can o’ super lager tae mah hoose, up the close in Shettleston.

The big snobby wurd “disproportionate” wiz used by the Europrats when they gied the SNP a doin ower thur Jakey Apartheid plans.

Me, ah’d caw it tryin’ to crack a nut wi’ a sledgehammer.

Ah bet he cannae wait tae get the baith o’ thum back when the Neverendum fails.

Ryders on the half million storm:

MARIE ANTOINETTE Salmond and the gang bang team Ryde the Scots to the road of excess. Unfortunately for him 140 jobs claim does not reside in the palace of wisdom. 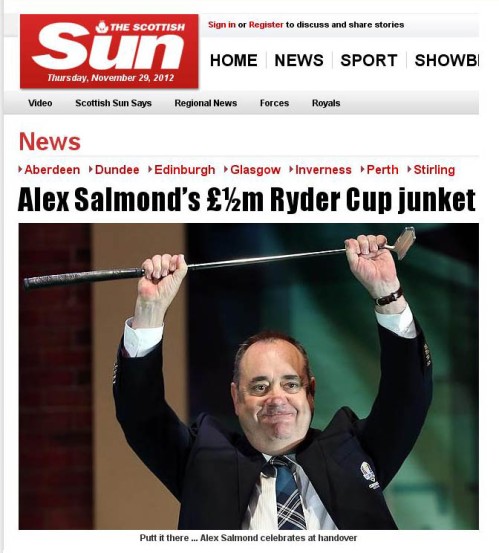 “An extravagance is something that your leader thinks is a necessity”. – Bern Williams. Of coorse it wiz aw aboot joabs.

SUN KING Salmond spent £500,000 on himself and his courtiers at the Ryder Cup to enjoy a richt guid knees up at the people of Skintland’s expense.

And they were found last night laughing all the way to a 140 jobs claim.

The Firstminster’s official Sports Apologist and 34 other quangocrats, freeloaders and hingers oan enjoyed milk, honey and champagne while the Scots back home tucked into some guid wholesome watered doon gruel..

In a typically robust  defense of the position Tricky Dicky Salmond said: “Labour did it an’ aw. It wisnae aboot huvin a hootinnanny, it wiz aboot joabs. Ur youse eejits daft or sumthin.”

Tagged as alex salmond, all about jobs, extravegance, not a junket, Ryder Cup

Murdoch’s Bitch set to clamp down on Scottish media

New Scottish media landscape envisioned for a post-Indy MacFox media empire to force the truth down the throats of anti-Scots types.

MURDOCH’S BITCH Sun King Salmond has warned the British Brainwashing Corporation that it can expect “payback” for its sustained oppression of his corporate master.

The Inralavyson report into Murdoch ethics is due to be published on Thursday.

Murdoch’s Bitch said he is all for regulating any non-Murdoch media outlet in the “interests of SNP balance”.

Under the new set up, an ombudsman patsy could pursue complaints raised on behalf of Murdoch’s newspaper monopoly.

Murdoch could also use any ombudsman issued “decree” to belittle and undermine any futile resistance to his republican neo-con pro-war interests.

Newspapers could also be forced into strict obeyance of Goebbels Murdoch policies on unions, enemies within and dirty dago foreigners.

For the past year, Lord Inralavyson has been listening to politicians systematically lie over their relationships with Murdoch.

Control of Firstminster bank account access is reserved to SNP special advisers but reporting of this in the future will be seriously curtailed.

‘Final Scottish solution‘
In an interview with BBC Skintland’s political patsy, Tryin Taylor, Murdoch’s Bitch said: “A lot of fears have been raised that me and Rupy will use regulation in order for a bit of payback. These fears are well founded. Let my anger at being exposed as a ‘barefaced liar’ be a warning. Andrew Kneel is f**kin’ deid”.

The Scottish cabinet has agreed to hold a talkin’ shop in the Big Parish Cooncil at Whollyrude next week to discuss the purchase of The Inralavyson Inquiry for Dummies book.

While Skintland suffers from Neverendum fatigue and the Yes campaign drones on and on about how we’re “different” from the Tory Tories, stats consistently show that the “anti-Tory Tory” ticket is turning voters off of the Neverendum in ever larger numbers.

By Moan MvVulpine – She turns him on, she turns them off

IF SKINTLAND was already an independent country, would our politicians be just as mediocrely dishonest as they are now?

Let’s look at what’s on offer.

New statistics have revealed that Skintland pays the highest Parish Cooncillor tax and pension pot rate in the world – even more than that paid to the Eurocrat gravy train.

Only yesterday, The Daily Ranger revealed yet another case of a SNP minster, Kenny MacNaeskill, serial lying to parliament.

Ho hum! Figures reveal that 98 per cent of Scottish politicians give the other 2 per cent a bad name.

Honesty inequality, that is the divide between Scottish politicians and the Scottish population as a whole.

It’s wider now than it has ever been and it’s all thanks to Tricky Dicky Salmond who leaves the rest of the Big Parish Cooncil in his not insubstantial lying wake.

Smaller European states, such as Greece, Spain and Italy are officially much less mediocre societies.

Now we have great news that the Tory Tory’s austerity cuts are set to go way beyond October 2014.

Victimhood by Westminster is set to be the real growth industry in Skintland.

Prime Towel Folder and Bean Counter Bullingdon Osborne continues to fail to register that the Big Parish Cooncil even exists.

Predictably, he was told “flick off”.

The list could create thousands of foreign jobs, boost Tricky Dicky’s flagging prestige and give the SNP new hope that they haven’t been abandoned by high information voters.

But nobody’s really paying attention anymore. Tricky Dicky Salmond is on the road to nowhere.

Wasn’t he always? Why would anyone choose to join him?

SNP urged to settle it aw ootside in a square go

New hard hitting report shows that Trade Unionists may not be so Unionist after all. 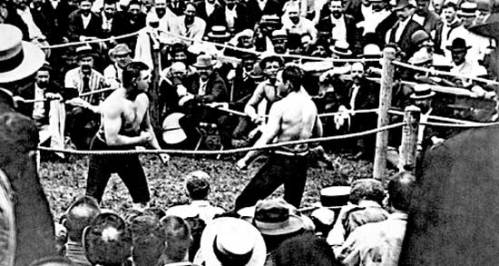 “Social justice can only be attained by violence. Violence creates what it intends to kill.” – Henry McLeish. Here’s tae a gloves aff ding dong when the facts dinnae chiel.

UNION COMRADES huv telt BAITH sides in the Neverendum debate to stop name calling and smash each other in the face insteid.

A hard-hitting report from the STUC blasts “the overall mediocrity of the barefaced language used” and voices “frustration at the lack of full on barefaced knuckle tae the heid contact”.

The report – called Just Punch Their Heid In – says a mare impassioned vision of partisanship and nationalist hatred is needed if the Just Say Yes (please) campaign is to succeed.

But it also warns Tory Labourers “not being the Tory Tories” and negative messages about the Tartan Tories will not be enough to win its comradely support.

He also chanted: “We need mare fisticuffs and less sloganeering!

Cancer of Cybernattery set to be ignored

“If one harbors anywhere in one’s mind a nationalistic loyalty or hatred, certain facts, though in a sense known to be true, are inadmissable.” – George Orwell

“Blind nationalism has been kept intact by rewriting history to provide people with moral consolation and a psychological basis for denial.” – William H. Boyer

Levels of pseudo-political Cybernat bigotry were worst in the autistically-genteel backwater of Bath – which accounted for almost HALF of the sourced incidents.

And the Big Parish Cooncil’s study revealed there were reports of Cybernat-aggravated offences emanating from all of Bath’s internet enabled closets – amid a SURGE in the scale of the problem since Newsnat shut its doors to Nationalistic Polarised Militants, Braveheart Commandos and 90 Minute Patriots.

The study – the most detailed snapshot of Cybernattery since the last one – shows around a third of cases are linked directly to misanthropic narcissism.

Unionism was the target in 57 per cent of 1690 crimes since 2011 – despite Ultimate Cybernats being restricted to one naebaws childless unmarried middle-aged crisis suffering sad sack going by the name of Rev Naebaws Campbell.

Using the official figures, AhDinnaeKen has compiled a national league of shame for Cybernattery hate crimes since 2011.

Aberdeenshire and Bathgate were the least affected by the diatribe.

She said: “Come on, the guy’s on our side! Nationalism, almost by definition, always turns a blind eye to hate crimes committed by its own side.

“Why else do you think I would so freely retweet him on twitter.

“It’s totally acceptable for our guys to engage in the type of offensive religious or sectarian language, or verbal attacks based purely on Scottish Nationalist prejudice, that anyone else would get locked up for.

“I hope this increase means that his baws are close to growing and dropping.”

The report showed nationalist hate crimes – mainly false assertions, ridicule, prejudice, lies, bigotry, threats and criminal lack of self awareness – are  most commonly committed by self professed “professional” journalists pretending they have the credentials to “monitor” the media.

“Media monitor” Rev Naebaws Campbell is 44 and did not know the Sunday Times had been printing a Scottish edition for the past 14 years.

Last year the Big Parish Cooncil and Scottish Justice Department were blasted after it emerged records of Cybernattery hatred cases between 2007 and 2011 had been destroyed – before any card carrying members could be ‘done’.