For more than 30 years the SNP have taken a highly principled stance against the proliferation of weapons of mass destruction and nuclear umbrella military alliances. Now that there’s a whiff of power to be had come the Neverendum, principles are booted out the door as quickly as the Lib-Dems commitment to Tuition Fees. Hurrah for our would be moral guardians of our new Braveheart Nation. 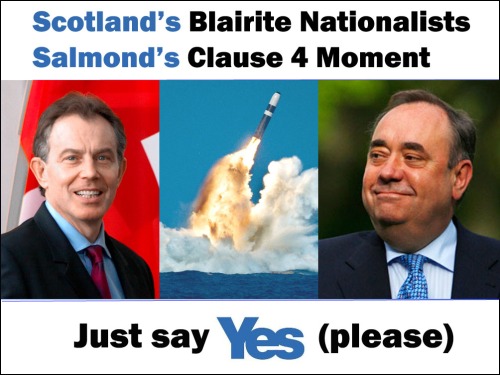 “A man’s country is not a certain area of land, of mountains, rivers, and woods, but it is a principle and patriotism is loyalty to that principle.” – George William Curtis. Pity that Wee Eck’s principle of a non-nuclear Scotland is the same as Tony Blair’s principled stance toward peace.